Debórah Dwork is the Director of the Center for the Study of the Holocaust, Genocide, and Crimes Against Humanity at the Graduate Center—CUNY. Internationally renowned for her scholarship on Holocaust history, she is also a leading authority on university education in this field. As the inaugural Rose Professor of Holocaust History and Founding Director of the Strassler Center for Holocaust and Genocide Studies at Clark University, she changed the academic landscape, envisioning and actualizing doctoral training in Holocaust History and Genocide Studies. 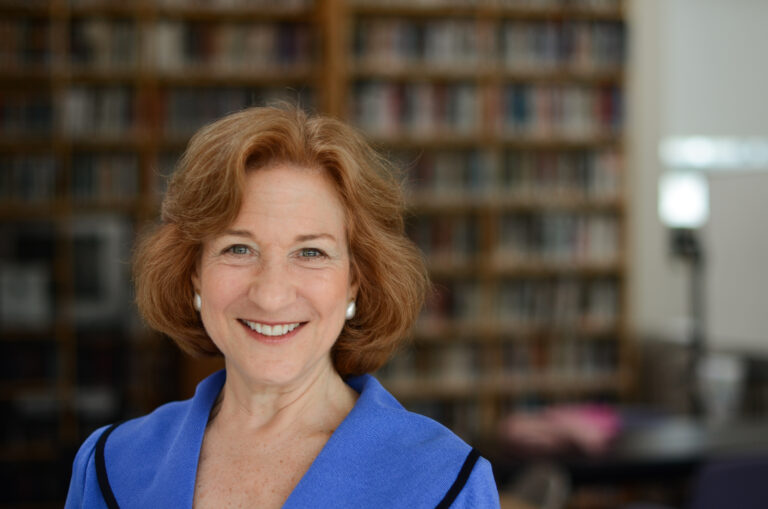 One of the first historians to record Holocaust survivors’ oral histories and to use their narratives as a scholarly source, Dwork explores the social and cultural history of the Holocaust. Her books include the now classic Children With A Star, translated into many languages and the subject of a CBC documentary. Recognizing that history focused on the adult world and that children were seen as future participants in that realm, Dwork imagined a new “child-centered” approach. A wholly original theoretical development, Dwork’s child-centered history opened a fresh area of historical investigation.Auschwitz, co-authored with Robert Jan van Pelt, received the National Jewish Book Award and the Spiro Kostoff Award and was selected by Newsweek as one of the Ten Best Books about Poland during World War II.  Dwork and van Pelt’s innovative use of architectural evidence to understand Auschwitz broke new historiographical ground. Holocaust: A History, again in collaboration with van Pelt and also translated into a number of languages, was a National Jewish Book Award Finalist. Holocaust was the first work to marry the history of the World War II and the history of the Holocaust, and to intertwine the history of the perpetrators and that of the victims.

Flight from the Reich: Jewish Refugees, 1933-1946 (co-authored with van Pelt) opened the geographic view of the Holocaust, integrated the refugee experience in that history, and extended the temporal frame to the postwar years. Flight was selected as a ForeWord Reviews Book of the Year Award Finalist and, in French translation, a Grand Livre du Mois selection. Especially intrigued by victims’ primary documents, Dwork’s beautiful Terezin Album of Mariánka Zadikow is an annotated, edited poesie album collected by a Jewish inmate as the Germans pressed forward with deportations from Theresienstadt.  Her A Boy in Terezín: The Private Diary of Pavel Weiner is an annotated, edited diary written by a Prague boy during his third and last year in the Terezín transit camp, from April 1944 until April 1945; it was his bar mitzvah year.

Dwork is currently engaged in two projects. Saints and Liars is about Americans — Quakers, Unitarians, secular people, Jews — who traveled to Europe to aid and, step by step, turned to rescuing people targeted by Nazi Germany and other racist states. Analyzing their daring initiatives, unpredictable and irrational factors come into focus: luck, impulse, sentiment, fortuitous circumstance, timing.  Dear Tante Elisabeth: An Extraordinary, Ordinary Christian during the Holocaust draws upon a cache of over 1,000 letters written by Jewish parents to their children and from the children to their parents.  Sent through Elisabeth Luz, a middle-aged, middle-class Christian woman in Stäfa, Switzerland, these letters tell much about daily life, and elucidate the complexities of communication, denial, and silence during and after the Nazi years.

Recipient of the Annetje Fels-Kupferschmidt Award (2022) bestowed by the Dutch Auschwitz Committee,  and the International Network of Genocide Scholars Lifetime Achievement Award (2020), Debórah Dwork has served as a Senior Scholar-in-Residence at the USHMM, and has been (inter alia) a Guggenheim Fellow, a Fellow at the Woodrow Wilson International Center for Scholars, and an ACLS Fellow. She serves on many advisory boards and works with non-profit organizations dedicated to Holocaust education. Above all, Professor Dwork is a teacher and mentor, committed to training the next generation of Holocaust scholars.