Debórah Dwork is the Founding Director of the Center for the Study of the Holocaust, Genocide, and Crimes Against Humanity at the Ralph Bunche Institute for International Studies, The Graduate Center – CUNY.  Internationally renowned for her scholarship on Holocaust history, she is also a leading authority on university education in this field. As the inaugural Rose Professor of Holocaust History and Founding Director of the Strassler Center for Holocaust and Genocide Studies at Clark University, she changed the academic landscape, envisioning and actualizing doctoral training in Holocaust History and Genocide Studies and growing the Strassler Center into a pre-eminent institution. 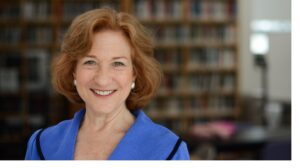 One of the first historians to record Holocaust survivors’ oral histories and to use their narratives as a scholarly source, Dwork explores the social and cultural history of the Holocaust. Her books include the now classic Children With A Star, translated into many languages and the subject of a CBC documentary. Recognizing that history focused on the adult world and that children were seen as future participants in that realm, Dwork imagined a new “child-centered” approach. A wholly original theoretical development, Dwork’s child-centered history opened a fresh area of historical investigation.

Auschwitz, co-authored with Robert Jan van Pelt, received the National Jewish Book Award and the Spiro Kostoff Award. It was voted a Best Book by the German National Book Critics and was selected by Newsweek as one of the Ten Best Books about Poland during World War II.  Dwork and van Pelt’s innovative use of architectural evidence to understand Auschwitz, and the way they moved their lens from German plans and practices to how these translated into the lived experience of Jewish inmates, broke new historiographical ground. Their scholarship prompted the Emmy-nominated BBC documentary, “Auschwitz: The Blueprints of Genocide.” Holocaust: A History, again in collaboration with van Pelt and also translated into a number of languages, was a finalist for the National Jewish Book Award. Developing their interest in intertwined histories, Holocaust was the first work to marry the history of the World War II and the history of the Holocaust, to discuss the Holocaust in the midst of gentiles’ experience of German occupation, and to negotiate the chasm between the two histories: that of the perpetrators and that of the victims; the Nazis’ push toward a “Final Solution,” and the Jews’ reactions and responses.

Dwork’s co-authored Flight from the Reich: Jewish Refugees, 1933-1946 opened the geographic view of the Holocaust, integrated the refugee experience in that history, and extended the temporal frame to the postwar years. Fleeing did not write refugees out of the story of the Holocaust, it simply took the story elsewhere. Realizing that the refugees’ escape around the world defied traditional plotlines, Dwork developed a novel narrative structure to carry their history. Unlike other histories that start and end at conventionally established dates, the history of refugee Jews has many starting points, even more end dates, and actors scattered across the globe. Dwork’s kaleidoscopic narrative reflects (and carries) its centrifugal and episodic character. Flight was selected as a ForeWord Reviews Book of the Year Award Finalist and, in French translation, a Grand Livre du Mois selection.

Especially intrigued by the analysis of the victims’ primary documents, Dwork’s beautiful Terezin Album of Mariánka Zadikow is an annotated, edited poesie album collected by a Jewish inmate as the Germans pressed forward with deportations from Theresienstadt.  Dwork’s A Boy in Terezín: The Private Diary of Pavel Weiner is an annotated, edited diary written by a Prague boy during his third and last year in the Terezín transit camp, from April 1944 until April 1945; it was his bar mitzvah year.

Dwork is currently engaged in two projects. Saints and Liars is about Americans — Quakers, Unitarians, secular people, Jews — who traveled to Europe to aid and, step by step, engaged in rescuing people targeted by Nazi Germany and other racist states. Few of the Americans who hurtled into action on behalf of the Nazis’ victims are known today. The inspired efforts and successes of people like Martha and Waitstill Sharp, Moses Beckelman, Laura Margolis, Marjorie McClelland, Elisabeth and Robert Dexter, and Herta and Noel Field elicit hardly a flicker of recognition. Dwork seeks to understand the choices and courses they pursued. Zooming in on a series of concrete situations (in Prague, 1939; Vilna, 1940; Shanghai, 1941; Marseille, 1942; Lisbon, 1943; and Geneva, 1945), Saints and Liars traces the development of initiatives on the ground and how they unfolded in real time. Analyzing these daring ventures, unlikely factors come into focus: luck, impulse, ambition, fortuitous circumstance, timing.

Dear Tante Elisabeth: An Extraordinary, Ordinary Christian during the Holocaust draws upon a cache of over 1,000 letters written by Jewish parents to their children and from the children to their parents.  Sent through Elisabeth Luz, a middle-aged, middle-class Christian woman in Stäfa, Switzerland, these letters tell much about daily life, and elucidate the complexities of communication, denial, and silence during and after the Nazi years.

Recipient of the International Network of Genocide Scholars Lifetime Achievement Award (2020), Debórah Dwork has been, inter alia, a Guggenheim Fellow, a Fellow at the Woodrow Wilson International Center for Scholars, and a Fellow of the American Council of Learned Societies. A member of the U.S. delegation to the 34-member state International Holocaust Remembrance Alliance, and Chair of its Academic Working Group (2019-2020), Dwork serves on many advisory boards and works with non-profit organizations and foundations concerned with Holocaust education. Above all, Professor Dwork is a teacher and mentor to students who value her commitment to training the next generation of Holocaust scholars . 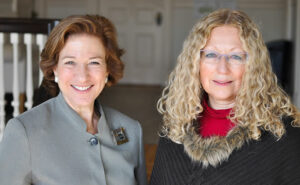